My attention was directed a few days ago by a friend (via Twitter) to a post on Common-Place, a history-themed blog sponsored by the American Antiquarian Society.  The post, by Joseph M. Adelman, is entitled “By Securing the Copies,” and draws some interesting parallels between two 18th-century American cases concerned with copyright and censorship, and the war that has been raging over SOPA and PIPA, as well as the recent judgement by the US Supreme Court that returns the protections of copyright to foreign works that had been in the public domain:

Putting modern debates into context is important. Laws restricting the circulation of information and publications have not been warmly received. Copyright has been an instrument to limit that circulation. And lastly, it was never intended to be permanent or retroactive.

The parallels that Adelman draws between SOPA/PIPA and the Stamp Act of 1765 reminded me of a rather different parallel to these two proposed bills that had occurred to me a few days ago.  In terms of social phenomena, probably the most comparable thing that 17th-century Britain had to the modern web was its coffee houses.  I have long thought that there were interesting parallels to be drawn between the function of these two phenomena; in fact, I wrote a few years ago an abortive paper (titled “You Have Been Poked,” or something equally inane) that treated coffee houses by way of analogy with online social media.  I should probably consider resuscitating that one.  Or not. 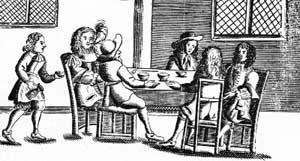 A coffee house, ca. 1674, from "A Brief Description of the Excellent Vertues of that Sober and Wholesome Drink, Called Coffee"

“Coffa” was an exotic Turkish drink viewed, initially, with some suspicion by patriotic Christian Englishmen, but it was a matter of only a few years following the erection of the first coffee house in London, sometime between 1652 and 1654, that similar establishments sprang up all over the city.  Restoration coffee houses were, first and foremost, social venues, and they differed from modern coffee shops in that customers sat not at small tables that could accommodate only a few friends, but on long benches that forced interaction with a diverse and broad variety of other patrons.  Conversation was general, and social interactions promiscuous.  As one broadside dating from 1674 put it:

First, Gentry, Tradesmen, all are welcome hither,
And may without Affront sit down Together:
Pre-eminence of Place, none here should Mind,
But take the next Seat that he can find:
Not need any, if Finer Persons come,
Rise up for to assigne to them his Room
(A Brief Description)

These lines suggest (even if they somewhat exaggerate) the degree to which coffee houses functioned as social sites that leveled or even “democratized” the highly-stratified society of late 17th-century Britain. In practice, coffee houses served as hubs in the literary and news networks of the time: they were clearinghouses for gossip, rumour, scandal, political news and discussion. More than this, however, they also functioned as dissemination centres for literature of all kinds, including manuscript poetry, newssheets, periodicals, and printed codices.  When news, poetry, or gossip went “viral” in the Restoration period, it was mostly usually through the agencies of the coffee houses.

This function of the coffee houses did not go unnoticed by the government of Charles II, which was concerned that these were becoming centres for the articulation of anti-government sentiment and even sedition.  In 1671 Joseph Williamson, who functioned essentially as chief intelligence officer for the government, opined “Pull down . . . coffee houses, and nothing can be more to the establishment of the government” (CSPD Charles II 11: 581), while Thomas Player, one of Williamson’s agents, commented in 1673 that “These sober clubbs produce nothing but scandalous and censorious discourses”  (Christie 2: 68).

The government had good reason to be concerned.  Opposition to the King’s ministers and his policies had been growing steadily since the mid-1660s.  In 1672, the same year as a Stop of the Exchequer signaled the government’s dire financial situation, Charles issued a Declaration of Indulgence, extending religious freedom to nonconformists; it was perceived as an attempt to sanction Roman Catholicism, and was so fiercely contested that Charles was forced to withdraw it the next year.  Parliament riposted in 1673 with a “Test Act,” which required of all office holders an oath disavowing the “truth” of transubstantiation, the immediate effect of which was to out the King’s brother and heir the Duke of York (the future James II) as a convert to Roman Catholicism.  This revelation sent shock waves of alarm through the kingdom.  The Third Dutch War, meanwhile, had concluded in a most unsatisfactory way in 1674, and rumours were beginning to circulate about the “secret” provisions of the 1670 Treaty of Dover, by which Charles II received secret funding from Louis XIV, thereby enabling him to rule without the assistance of Parliament.

By 1675, dissent had grown to alarming proportions, and was reflected in a growing tide, not merely of seditious talk, but  of anti-government satire (mostly in manuscript form) and pamphleteering.  And the focus for this increasingly vocal dissent was, as the government was beginning to recognize, the coffee houses.

At last, on 29 December 1675, the government moved, issuing A Proclamation for the Suppression of Coffee-Houses.  The proclamation took a number of swipes at coffee houses, but in particular asserted that they were places where “divers False, Malitious and Scandalous Reports are devised and spread abroad, to the Defamation of His Majesties Government, and to the Disturbance of the Peace and Quiet of the Realm” (Proclamation for the Suppression).  All such establishments were ordered closed by 10 January, 1675/6.

The government’s move to shut down coffee houses caused, understandably, a great deal of consternation.  One private newsletter, written little more than a week before the measures announced in the proclamation were to take effect, noted that there had grown “a mutinous condition in this towne upon the account of coffee-howses” (Hatton Newsletter,  1 January, 1676, quoted in Ellis 92).  One probable reason for the sharp public reaction may lie in the relative effectiveness of the government’s measures to control the flow of information in printed form:  with the assistance of the Stationers’ Company, Roger L’Estrange, the Licenser of the Press, had done a fairly effective job of controlling the conventional press.  For this reason, most expressions of public dissent were circulated in manuscript, and the coffee houses had an absolutely central function in that process. Shutting down the coffee houses would have seriously fettered a public discourse that was already very tightly managed by the government.

Meanwhile, those with an economic stake in the coffee houses had began to mobilize. Led by Thomas Garraway, the proprietors of coffee houses in London issued a petition against the suppression on or about January 5. Two days later, Garraway, a “Mr. Taylor,” and Sir John Duncombe, the Chancellor of the Exchequor, but here acting as spokesman for the coffee houses, met with the Privy Council in Westminster to present their case. As Markman Ellis has noted, they argued that the proclamation caused undue hardship to law-abiding and tax-paying merchants:

The coffee-men cast themselves as merchants who obediently, legally and merely sold coffee. It was for this purpose, they reminded everyone, that they held the ‘licences’ from the magistrates, guaranteeing the payment of their Excise dutes. The law, they reasoned, recognized their place within the commercial world. As they further observed, the coffee trade paid a great deal of money in taxes and their trade was a lucrative source of revenue for the King. All this, they argued, was jeopardized by the proclamation. Furthermore, the proposed suppression of their trade would leave these poor and hard-working tradesmen in some considerable hardship: they would have great stocks of coffee left unsold, the price of which would collapse. (94) 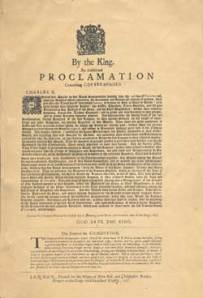 In the face of a mutinous public, legal and political opinion that suggested that the proclamation’s revocation of licences was unworkable or illegal, and pressure from the major “stakeholders” in the trade, the Privy Council began to reconsider  its position.  Within little more than a week of the original proclamation, on 8 January, the government issued a new Additional Proclamation Concerning Coffee-Houses. The new proclamation effectively revoked the order to close coffee houses by extending permissions for these establishments for an additional six months.  (As events transpired, the 6-month deadline passed without any further action from the government.)

However, the proclamation did enact new conditions to which all proprietors were to be subject. The coffee house owner was directed to “use his utmost endeavour to prevent and hinder all Scandalous Papers, Books or Libels concerning the Government, or the Publick Ministers thereof, from being brought into his House, to be there Read, Perus’d or Divulg’d,” as well as to suppress discussion within his premises that might similarly be said to be a “Scandalous” reflection upon the government. What is more, proprietors were directed to report instances of the above to “one of His Majesties Principal Secretaries of State, or to some one of His Majesties Justices of the Peace” within two days of its appearance in the coffee house. As surety for this behaviour, coffee houses were held in recognisance to the sum of £500.

This last provision is particularly evocative of the measures proposed by SOPA and PIPA.  Like those abortive and largely unlamented attempts to control and censor the internet, the Additional Proclamation would have called upon those who most fervently opposed the law — in this case, the coffee house owners themselves — to enforce it.  Similarly, PIPA and SOPA, as some have observed, would have required Google, Facebook, and other opponents of these bills to police them.  How effective, one wonders, would they have been at doing so?

That this kind of self-regulation would have been largely unworkable is suggested by the actual experience of the coffee houses in the decades following the government’s proclamations:  there is very little evidence that these venues became any less “seditious” than before.  Indeed, by the summer of 1676, the coffee houses were once again the focus of political dissent, as the Earl of Shaftesbury and Duke of Buckingham began to employ them to organize opposition to the King’s administration.  Their success in producing a coherent oppositional voice, one which would eventually coalesce as the Whig party, is in some measure testimony to the role of coffee houses as conduits and network hubs for the exchange of ideas and information.  And the survival of the role of coffee houses in fulfilling just this function is compelling evidence that, even if it is not necessarily true that “information wants to be free,” it is certainly the case that attempts to muzzle or control decentralized information networks are likely to prove difficult at best.

Charles II. A Proclamation for the Suppression of Coffee-Houses.  London, 1675.

Greenwood, Paul(?), A Brief Description of the Excellent Vertues of that Sober and Wholesome Drink, Called Coffee, and Its Incomparable Effects in Preventing or Curing Most Diseases Incident to Humane Bodies. London, 1674.